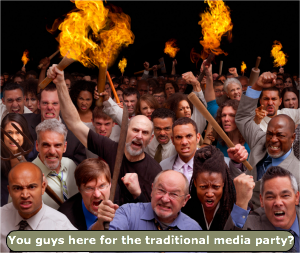 It sure is en vogue to be riding the “death of traditional media bandwagon.” Attend any modern marketing event and you can’t escape the feeling the moment you walk in the door of a cultish ambience that permeates the room as the finger of modern marketing’s creeping death lurks all around to slay anything that doesn’t represent the new thinking (ok, I might be blacklisted from these events by the close of this blog.) And lumped into the anti-traditional marketing mentions that often seem to have little to no B2B vs B2C distinction are the “rah rah” keynotes calling for the end of days when it comes specifically to the online display advertisement (which is an infant compared to typical forms of traditional marketing.) So I’ve decided to go traditional too, the old-school REAL blog style – a stream of thought with no research while resorting to just the gut to defend the display ad.

Let’s get this out of the way before I go any further, I’m a bit of a hybrid – I’ve relied on content marketing to drive lead generation through my tele prospecting teams and onto field sales for quite some time starting in Financial Services, then Software, moving on to Healthcare, and now…. wait for it… in the world of traditional media – BLASPHEMY!!! These days, I get calls from companies of all shapes sizes and forms – you cannot even imagine! One of my favorites to this day is an inquiry from a paranormal investigations company looking to advertise on television (yes, I resisted the urge to ask them if they’ve ever been slimed before, but I digress.)

So here I am, going against the grain – here to tell you that the truth to display advertising lies somewhere between the hard core stats and the gut (that middle space which is where I feel most truths reside.) I know I know, many of you right now are ready to scream stats at me that say you are more likely to get hit by lightning or become President of the USA than to click on an online display ad. I guard my clicks like the rest of you – and to that I suggest: Is it time to rethink how we define the online display click? 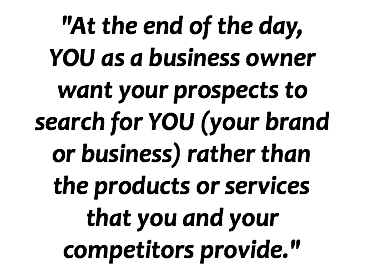 First, I’ve got some (pseudo) stats too – did you know you are infinitely more likely to get hit by lightning that riccocheted off the outdoor ad you were walking by than to physically click directly on that ad? More likely to win the lottery once a month than to click directly on a scoreboard ad at a baseball game? More likely to land on Jupiter build a small settlement and rent out the spare room to an extra terrestrial than to click directly on a highway billboard ad? Great odin’s raven, they must be free then! I mean, they don’t work since nobody clicks on these – why would anyone buy such waste except if it had some branding value perhaps… novel thinking! Generous amounts of sarcasm aside, obviously “modern” marketers see and capitalize on the value of these “display” advertisements because they understand them for what they are – “display.” Maybe, just maybe we should give online display the same distinction. Akin to their brethren in the stadiums and highways across the U.S., let’s stop putting so much pressure on them to deliver something they are no longer (in most cases) designed to do.

In other words, in a B2C world, have we arrived at a place where online display ads hold similar value to local advertisers as their billboard counterparts? Is the geo targeting value of online display most effective when paired with a message for a local event, local service or something like a local healthcare system than vs. a national ad for say Coke? Could we be saving our clicks for our local brands – possibly tuning out the bigger brands? And in general are we selling this inventory all wrong, by placing the value on the action when we should be placing more on the power to drive awareness? For a public entity with a local public announcement campaign and no need to ring the cash register, isn’t online display a no brainer? How about for many non-profits or events? Is the billboard at the ballgame so different from the online billboard on your computer screen? Or the highway billboard that I certainly didn’t jump in my car at 7am with the intention of driving to see with purpose? Oh yeah, I’m the only one that sees all these advertisers, right?

And speaking of seeing, how can all those pupil tracking studies be wrong – I mean, none of them indicate that people are looking at any online display ads! Yet the very next article you read talks about the rising rage and fuming anger people are bursting at the seams with when it comes to retargeting display ads following their every move. Well, which one is it – are we seeing these or not? Maybe all the pupil tracking devices are broken? It’s been said there are three types of lies – they are lies, damned lies and statistics – especially in a day and age when just about every study and counter-study has a handful of needy investors driving self-serving results that are potentially enshrouded in clouded judgement calls along the way.

Ok listen, I’m not saying stay away from things like content marketing – I make a living on it and it is CRITICAL to most businesses out there. But I have to say, the next time I turn to see the chairs in my kitchen stacked while my back was turned, I’m going to the inner depths of my brain to think about who I’m gonna call – and the brand recall is going to likely come from a combination of ads and content that differentiated themselves in several places / screens with creative messages that my brain hasn’t previously chosen to tune out. And my brain will get help from the branded eBook I recently downloaded titled “7 Sure Signs You Are Being Haunted.” And then when I go to everyone’s corporate website otherwise known as Google, and I search for “what to do for my haunted Arizona home,” I’m going to see a smattering of companies on that first page (somehow Amazon will show up I’m sure.) Will the Mom & Pop paranormal business who opted just for the production of a few “how-to” videos, eBooks and other content while neglecting traditional media show up on that first page with the bigger companies? Questionable at best! But maybe with a bit more power on the branding side, perhaps I’ll recall the name of the company I heard on the radio, or saw on TV or maybe on that display ad which now retargets me everywhere I go, in essence haunting me in another way because of a Google search or eBook landing page! Perhaps I click through to the second search page until I find the name of the company I recognize from the creative display or tradional media ads. Maybe, just maybe that’s where they get my click.

At the end of the day, YOU as a business owner want your prospects to search for YOU (your brand or business) rather than the products or services that you and your competitors provide. Branding is still key, and traditional media still looms powerful, and the trick is now, as ever, creating the right advertising mix – modern and traditional – for your business. Give pause the moment someone tells you that some form of advertising is “dead,” using cleaver comparisons and such and think about the bigger brands still utilizing it – for likely there is valuable information behind their spend. That because these same companies pull back a portion of their spend in a specific place, does not mean it’s a dead medium, but more that a combination of different media telling a consistent story has a better chance of meeting the customer at their online and offline watering holes. The power of branding resides in the creativity and effectiveness of the message delivered in a cross of advertising streams (YES, please cross the streams!) — which at the end of the day can defend your business from becoming just another ghost.

This site uses Akismet to reduce spam. Learn how your comment data is processed.